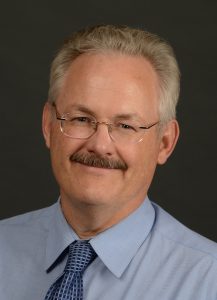 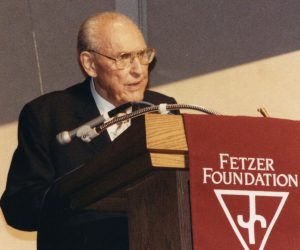 **Brian C. Wilson, author of the new book, John E. Fetzer and the Quest for the New Age, is a professor of American religious history in the Department of Comparative Religion at Western Michigan University (WMU). He holds a Ph.D. in Religious Studies at the University of California, Santa Barbara.

**After writing an award-winning book on cereal inventor and the leading Seventh-day Adventist of his time, Dr. John Harvey Kellogg, the Fetzer Institute invited Wilson to write a full-length spiritual biography of its founder, John E. Fetzer. The Kalamazoo-based Fetzer was a radio pioneer, media mogul, and long-time owner of the Detroit Tigers baseball team. But what most people didn’t know was that John E. Fetzer was quietly behind-the-scenes a significant figure in the consciousness movement and a spiritual seeker of the first order. For more than 60 years, he sought ways to open the doors of higher consciousness, spiritual empowerment, paranormal insights and energy medicine to humanity through spiritual study, science and the influence of the wealth at his disposal.

**In John E. Fetzer and the Quest for the New Age, Wilson not only explores the evolution of Fetzer’s beliefs, but how he put them into action by permanently endowing three funds that will foster research into the scientific/spiritual interface for years to come, and help cultivate a more peaceful, loving and inclusive world founded on the principle that we are all connected through one infinite force.

**The Ever Present Infinite Potential

*Consciousness is never static or complete; it is ever expanding. Science and spirituality are often considered separate areas of inquiry. But what if there is no separation? As researchers continue to explore consciousness, what may be emerging is the possibility that everything is interconnected – on the planet and throughout the universe. If so, could awakening to this interconnection hold a key to experiencing your Infinite Potential?

“I feel that we are on the threshold of a new order where people will be seeking enlightened change… This will all come about with the infusion of spirituality into science. ” ~ John E. Fetzer

John E. Fetzer was a pioneer in the radio industry, a legendary owner of the World Series Detroit Tigers baseball team and a beloved philanthropist. He had a lifelong interest in cutting-edge science and spirituality. He believed that science was essential to advancing our understanding of the integrated and relational nature of reality and the human being, including body, mind, and spirit. John often quoted Albert Einstein who said “The most beautiful and profound emotion we can experience is the mystical. It is the source of all true art and science.”

“Love is the core energy that rules everything. It’s the force field…of creation. Love is the one ingredient that holds ALL together”